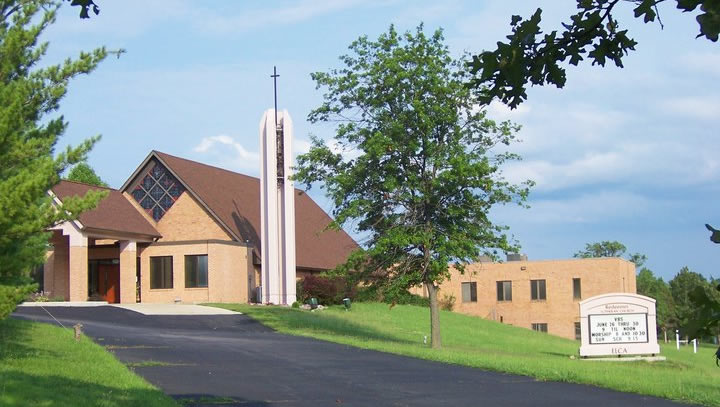 Visit our Sunday worship services at 8 or 10:30 am. Sunday school and adult Bible class at 9:15. We are "Making Christ Known" by faith, worship and witness to get the message of Jesus Christ to all people.

Our October 2 Sunday worship service is available on video through Facebook. Our Sunday 8 & 10:30 am services are open for in-person worship. Services will continue to be streamed online.

The October 9 Sunday worship service will be held with in-person attendance. With the reduction in COVID cases in our county, masks are optional and up to the individual.
It is scheduled to be streamed live on the DeSoto Redeemer Facebook page. We will post a direct link to the recording here as soon as it is possible after the service.
We are glad to share our worship with you. Click on “Contact Us” above to find out more about our faith family and what we believe.

“For by grace you have been saved through faith, and this is not your own doing; it is the gift of God – not the result of works, so that no one may boast.” Ephesians 2:8-9

Dear Redeemer Family:
October is the month in which we especially remember the Reformation. At the end of the month, the last Sunday, we commemorate Martin Luther’s posting of his 95 Theses, which kind of kick of the whole phenomenon. Although we say he “nailed the 95 Theses,” he probably pasted them to the Castle Church door at Wittenberg. It was basically the town bulletin board, and was used to post a lot of items. Nails would have worn out the door fairly quickly, and it stood for hundreds of years. If you would like to see a picture of the modern doors there, see me. I took a picture of them a couple of years ago and have them on my cell phone.

But, looking at October, there are a number of different commemorations during this month that are seen as renewing the Church. They too should be seen and affirmed.

On October 4th, we commemorate St. Francis of Assisi. He died in the year 1226. I like to think of him as people’s favorite saint, or at least, best known. He is commemorated as a “Renewer of the Church.” He and his followers were known for an emphasis on preaching, but with a twist. In that regard, he is famous for saying, “use words if necessary.” He and his followers were particularly known for their acts of compassion. He was known for his cheery demeanor and his gratitude for God’s creation. He is often depicted as preaching to the animals. The “Blessing of the Animals” is often performed on this date as a commemoration to him and his faithfulness.

Another “Renewer of the Church,” whom we commemorate in October is Teresa of Avila. We commemorate her on October 15th, the date on which she died in 1582. Teresa was a Carmelite nun. She was also pretty sickly for most of her life. But she noticed that the sicker she was, the deeper her prayer life became. Over the years, she developed a very deep faith and prayer life. She reformed her community to embody its original purposes. Her followers were sometimes called “the shoeless sisters,” as she made them go about barefoot. She believed that being barefoot helped them to identify more with the poor. She wrote a number of books on her devotional life. If you would like to know about her, see me. I have one of her books. It is very deep.

Yes, October is really a rich month for the Church for Reformation and Renewal. And those are two thoughts that we should keep in mind these next few weeks.